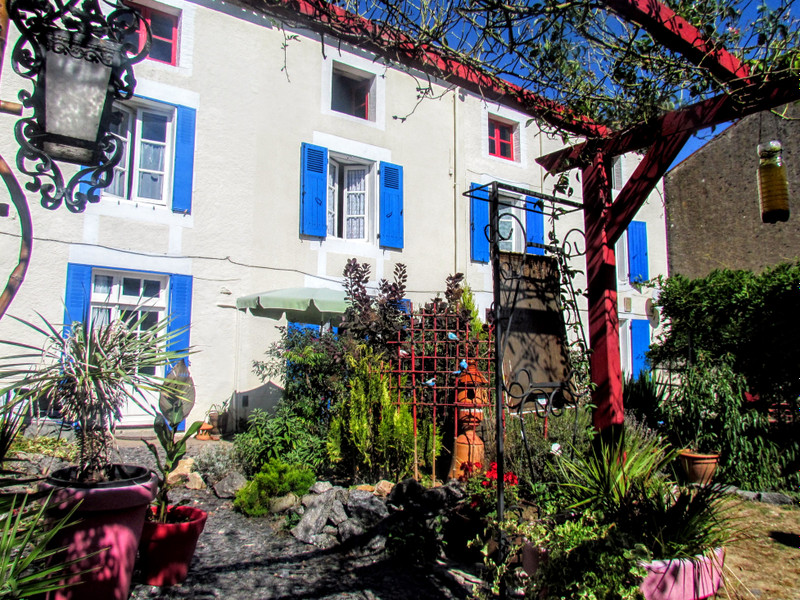 Gorgeous and extremely special arty house with four bedrooms and three bathrooms, outbuildings, garages and land on the edge of a village near the popular tourist town of L'Isle Jourdain 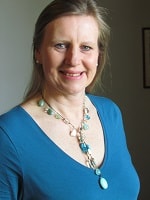 Previously a coaching inn dating from the 1850s, these three houses have been joined to make one huge house, with many original features, including stone fireplaces, original windows and tomette tiled floors. With large and characterful gardens both behind and in front of the house this is really an opportunity not to be missed. Large airy rooms filled with sunlight from the south-facing windows.
The house is on mains drains and has two wells for watering the gardens. Read more ...

As you come into this amazing house you immediately feel at home in the traditional kitchen (28m²), which has plenty of space for a farmhouse table. There is a door to the back garden from here as well as the glazed door to the front. The dining room (27m²) is next door to the kitchen and again benefits from a beautiful glazed door to the front of the house; a lovely chimney piece with large wood-burning stove. This leads back to a store room or pantry and a shower room which has a shower, basin and lavatory.

The sitting room (30.5m²) originally the "tap room" where drinks would have been served, has a wonderful tomette tiled floor, a stone fireplace, another very pretty wood-burning stove and a beautiful built-in cupboard. A door leads back to a small shower room with a wash basin - this rooms also currently serves as utility and freezer storage.

The hall is open plan to the sitting room, and has a stunning staircase that leads up to the upper floors. There is a back hall with a loo under the stairs and another back door to the garden.

As you go up the stairs, on the landing is a little cupboard which has a stone sink and bull's eye window inside it which at one time would have been the only washing facilities in the house. The first floor consists of the two smaller bedrooms on the right (16m² and 14m² respectively), a beautiful bathroom (6m²) with an amazing view over the stunning countryside at the front of the house and a sunken bath. From the landing you go through bedroom three (23m²) which would make an excellent occasional bedroom and snug telly area and on the end is bedroom 4 (17.5m²).

The upper floor is a huge attic (101m²) with large windows and high beams so plenty of space to create more rooms, if needed.

The garden is shaded by a large acacia tree and has several outbuildings on it, one of which concealed a member of the French Resistance for over a year from 1942. This hideout was never discovered by the German army. This building needs a new roof as it was struck by lightening.

The garden is surprisingly large and very pretty, and there is plenty of space for vegetables. Across a little green lane at the back of the garden is a paddock (1518m², almost half an acre) where you could easily keep chickens, a pig and possibly even a pony. There is a further strip of land not connected but very nearby of 383m²

Opposite the house are three garages, so plenty of parking and space for the logs and a fourth garage on the lower level to give even more outside storage space.

Almost exactly half way between Poitiers and Limoges (approximately 65km or just under an hour by car to either) this property is very convenient for the airports of Poitiers or Limoges, both of which have regular flights to the UK. 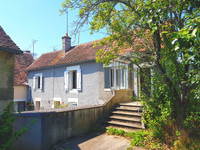 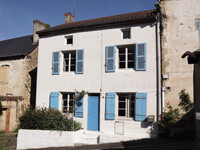 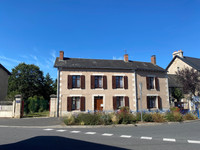 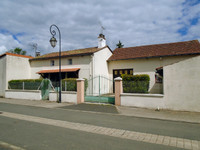 Search in Neighbouring Villages and Towns near Luchapt