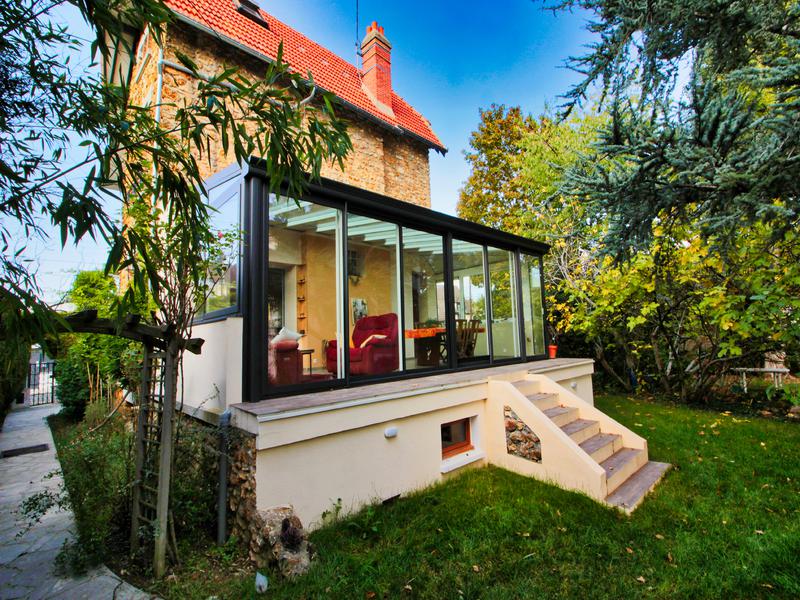 Reduction from €699,000 to €698,000
Very beautiful character residence in millstone from 1929, all shops and transport nearby, in a quiet environment and out of sight.

Triple exposure west - south - east for this very luminous residence due to the architect R.Rouzeau, organized on four levels of which total basement. Presents also an entirely independent extension for living or working space. Total surface of 268 m² (about 2884 Ft²) livable on a raised ground of 667m² (about 7179 Ft²). A large veranda widely opened by sliding picture windows on the garden adds a real charming look to the whole, in which we also find a well (functional), a pond with Koi carps and a small chalet that can be used as a greenhouse as well as a relaxation area in summer.
Two entrances on two streets, one of which is through a gate allowing access for up to two vehicles to the property, which is also surrounded by vegetation, which makes it largely hidden from prying eyes.
Very good access to Paris with the ReR C train station at 500m (access in 22mn to the station "Bibliothèque François Miterrand", automatic line 14), the buses are 50m away and 5mn walk to shops, schools, conservatory, college, park ... Read more ...

On the first floor, we find at the top of a flight of stairs 1 large entrance hall with several cupboards, 1 music room with French windows opening onto a large veranda/living room of 30 m2 (about 323 Ft²) with tiled floor heating and large sliding bay windows, lit by dimmable spotlights (inside and outside). It is possible to create a fireplace in the veranda. A dining room with also its original tiled floor, a kitchen, a separate toilet.

On the 1st floor, which is accessed by a wooden staircase, there is a landing of 10 m2, a vestibule leading to two bedrooms, one of 16 m2 (about 172 Ft²) with a large closet, the other of 14 m2 (about 151 Ft²) with a dressing room, and a spacious bathroom with bathtub and separate wc.

On the 2nd floor, under the attic with exposed beams are 1 landing and 2 bedrooms, one with dressing room and the other attic, 1 bathroom with shower and toilet.
The extension consists of an independent room with sink (hot and cold water), accessible by two French windows and lit by a window, used as an office, bedroom or work room. The pipes being present, it is possible to add a shower room to create an independent studio.

In the basement (ceiling height of 1.98m - 6,5 Ft ) there is a laundry room and storage rooms with access door to the garden and windows.
All the windows of the house are double glazed tilt-and-turn windows with electric shutters with individual controls. City gas heating by means of a condensing boiler. Alarm protection with smoke alarm Verisure.