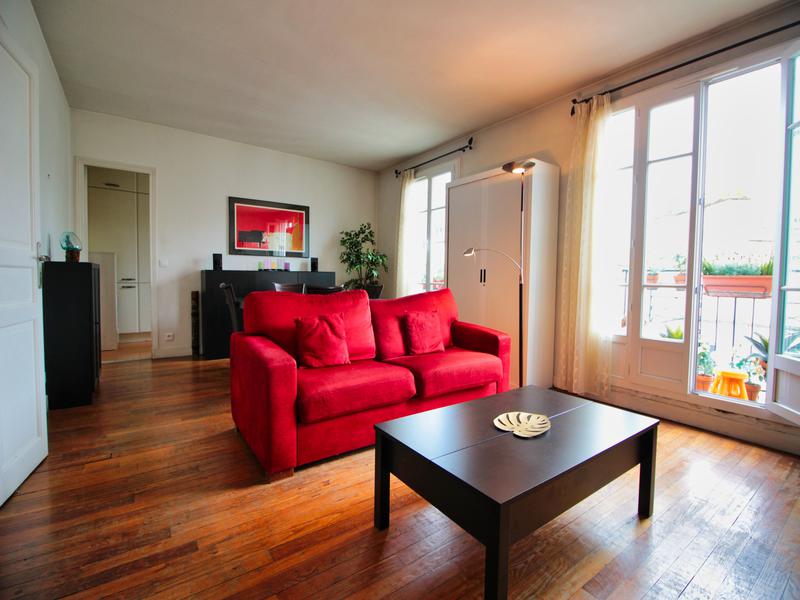 3/4 room apartment of 67 m², bright (facing east and west) and not overlooked. On the 5th floor with elevator, the apartment with good potential is composed of: hallway, Double living room with balcony, (or possibility of single living room and one bedroom) est side - 2 quiet bedrooms west side overlooking the garden of the Eugène Napoléon Foundation. Independent and equipped kitchen, bathroom, separate wc. Bikes storage room. Cellar in the basement. It is a good school sectorization, College and lycée Saint Michel de Picpus - Lycée Arago, Hélène Boucher as well as several good crèches, primary and secondary schools, as Reuilly, Picpus ,d'Artagnan, Eugène Napoléon foundation- Saint Pierre Fourier, and also the new extension of the University Sorbonne Nouvelle Paris 3 University, are nearby.
Nation station lines 1, 2, 6, 9 and RER A. Possibility to buy additional parking nearby. Read more ...

The building dates back after 1900, with quite high ceilings of 2.64m. The roofing has been recently replaced in 2018 and it just remains to effect the renovation of the common parts.
The situation is excellent and adjacent to the Eugene Napoleon Foundation quarters and gardens.
The heating is individual and electric. The annuel charges payable quaterly is 1800€ and includes cold water and the building maintenance. The land Tax is annually 844€. High speed fibre internet available at the spot.
The entrance door is secured by digital code.

The 12th Arrondissement has been totally revitalized and is now the new, trendy spot in Paris for the younger crowd and considered by many to be the “New Saint-Germain”. Located on the Right Bank, it is best known for the Bois de Vincennes reached by an elevated greenbelt promenade that stretches for almost 3 miles from Place de la Bastille and built on a defunct railway. Here you will find several artist’s workshops as well as trendy eateries, galleries and boutiques – a must visit for anyone interested in art and design. The area also includes the world-famous Opera de la Bastille and the unavoidable Parc and Village de Bercy, a 26-acre landscaped parks that infuse this area with new life and excitement. The perfect place to take an afternoon walk on one end or find the largest Paris indoor arena (stadium and concert hall), restaurants, a plethora of stylish boutiques and cinemas at the other end. The district main sights and attractions includes a breath-taking Art Deco structure, the 'Palais de la Porte Dorée' built for the 1931 Colonial Exhibition (it houses the national immigration museum and an impressive aquarium), the Bois de Vincennes Buddhist Temple and the lake with small islands and rowing boat, the trendy district of Faubourg Saint-Antoine, the Picpus Cemetery were the French revolution Guillotine was standing, and the historic Gare de Lyon train station, site of the acclaimed Belle Époque restaurant ‘Le Train Bleu’.
Eeasy access to Bois Vincennes, the largest public park in the city, created between 1855 and 1866 by the Emperor Napoleon III, Daumesnil Lake, Bercy and Reuilly Islands, river bank of the Seine river, Promenade Plantée Park and its green belt-Public Swimming Pools, Jean Boiteux (Reuilly),Roger Legall and Pool barge Josephine Baker just after crossing the Seine in the 13th arrondisement.
Also gardens, Paul Pernin Garden, Square Jean Morin, Bercy rail station, Bercy Park, Cinémathèque Française - Popular film museum with screenings, Movie Theater UGC Ciné Cité Bercy, and, just across the Seine, National Library of France - François Mitterrand, Pavilions of Bercy - Fairground museum in an old wine hall, Rothschild Hospital and Armand Trousseau University Hospital, Paul Dukas’s Conservatory, music, danse and theater. Place de la Nation.
Park : The Bois de Vincennes is the capital's second largest 'green lung', after the Bois de Boulogne. It is located in the east of Paris, on the edge of the 12th arrondissement. Many organizations based in the Bois de Vincennes enable visitors to find out more about the wood and get a closer look at its wildlife; Several riding stables, UCPA and la Cartoucherie.
École du Breuil and its arboretum, the Jardin d'agronomie tropicale, the Ferme de Paris, the Maison Paris Nature, ornithological reserves, etc. The Chateau de Vincennes, a magnificent example of medieval architecture, remains the wood's most notable monument, open every day. There are plenty of chances to relax, have fun or play sport. The Parc Floral is a family paradise with its play areas, including 18-hole mini golf, slides and ping-pong tables. The Parc Floral also offers many free events, especially in the summer; Paris Jazz Festival, the 'Pestacles' festival, Festival Classique au Vert ... On one of the lakes, visitors can go for a boat ride, and fans of horse racing can bet at the racecourse. The Bois de Vincennes is an unmissable place to explore on foot, by bike, alone, as a couple, with friends or as a family!