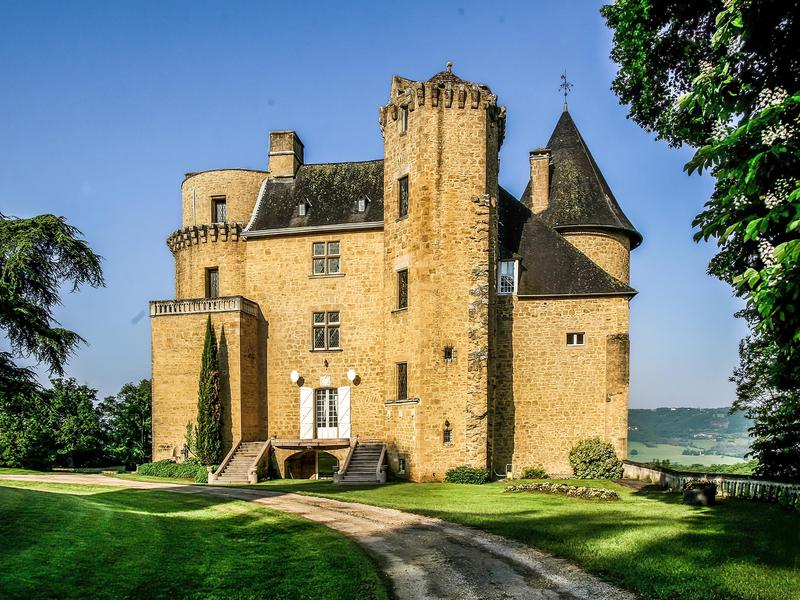 Castle built on the 15th century with outbuidings and park of 10 ha and at 20’ from the highway and the international airport of Brive-Vallée de la Dordogne.

On the surrounding plain of the areas of Lot and Correze, between the villages of Martel and Turenne, the castle was built on the 15th century for a lord of the Vicomte de Turenne. Many works were made as soon as the 16th century, and later on the 18th during successions and sales (present windows on the west façade), before that the castle was entirely renovated by the present owners. The main building has Two circular towers at each angle of the west façade, and a polygonal tower for the upstairs at the back angle of a building’s vestige which certainly was the chapel. Then we can see some machicolations on a tower and a part of the main building. Read more ...

 The castle includes the ground floor and 7 floors via a magnificent 15th century spiral stairway with 84 steps. On the ground floor, there are the dining-room with its monumental chimney and its vault with emblems, the kitchen and its cellar which is open on outside and has a servant’s staircase, a living with chimney and parquet, 3 bedrooms with 2 shower or bathrooms. In a corner of the dining-room, we can access to the spiral stairway and the floors. On the 1st one, vestibule, a bedroom with a shower room, and another one bedroom. On the 2nd floor, a suit-bedroom, a living with chimney, a bedroom with its shower room giving access to the servant’s staircase. On the 3rd, vestibule, living with chimney, shower room, bedroom with balcony and terrace. On the 4th floor, a flat including a living, a kitchen, 3 bedrooms. On the next and 5th floor, a surprising circular room which was an antic library with its perch, and two rooms. On the 6th floor, there are the antic arm room separated in two rooms with an imposing chimney and a room needing to renovate. Then on the last and 7th floor, the attic room and a small stairs giving the access to the roof of the tower.

 The castle’s service quarters were renovates in two flats whose the first one includes the living, the kitchen, 2 bedrooms and a mezzanine, 1 shower room, while the second flat has 3 bedrooms.

 Other outbuildings whose some one need renovation : Barn, Bakery, antic tack room and work shop, greenhouse at the back of a wall, wash house.