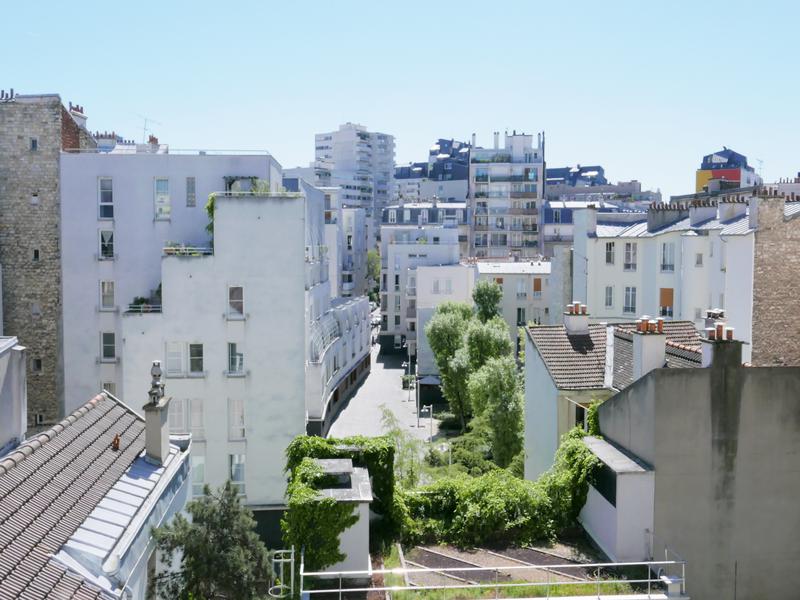 Paris 15th, close to the famous "rue du commerce" and the Motte-Picquet, 1-Bedroom apartment of 50 sqm + 4 sqm balcony, on the 5th floor with elevator, without vis-à-vis, very quiet and bright, in the heart of a dynamic Parisian area at just 10mn walk away from the Eiffel Tour and the Champ de Mars

Paris 15th - Quartier Commerce / Motte-Piquet - 50 m² - 1-Bedroom - Close to the famous rue du Commerce, 49.70 sqm Carrez apartment with a balcony of 4.3 sqm, facing south, without vis-à-vis, on the 5th floor with elevator of a beautiful modern residence, including a spacious and comfortable living room, a fully equipped open kitchen - American style, a bathroom with a large shower, separate WC, and a dressing room + many storages. The property is completed by a large cellar of approximately 10 sqm. Possibility of acquiring a parking space in the basement for €30K extra.

The apartment overlooks rooftops through a bright green gap, giving it a totally unobstructed view. Ready to move in. Perfect for a Parisian pied-à-terre. The ideal location to discover the most beautiful monuments of Paris, go shopping and go to the restaurant by foot or by metro. Indeed, for lunch breaks and diners, the good restaurants, bistros and famous brasseries abound in the La Motte-Picquet – Grenelle area. The residence is located less than 10 minutes' walk from the Eiffel Tower, 20 minutes from the Invalides, while enjoying the cachet of the historic district with some of the finest Haussmann buildings in Paris. At just 2minutes walk, the Rue du Commerce allows you to find fashion and food shops that wonderfully contribute to the intensity of neighborhood life and its famous reputation.
Read more ...

Additional information - The apartment has double glazing, electric shutters, a beautiful stretched canvas ceiling with backlights in the main rooms with a ceiling height of 2.6m. The entrance is secured by an armored door. The heating is central CPCU type. The charges are of €200 / month all inclusive, and property taxes are of €1300 / year

Building - Beautiful upscale residence of 11 floors built in 1975 and very well maintained. The entrance is secured by a digital code. Optical fiber is accessible in the building. The building benefits from the services of a full-time concierge. The cleaning of the building pinions was voted and paid. No other renovation work planned/ needed for future years.

At two minutes' walk, there is Motte-Picquet-Grenelle with its famous restaurants and bars and the famous “rue du Commerce”; a little further you will find also the Beaugrenelle shopping center (open Sundays) and the notorious delicatessen of the St-Charles street; the shopping area of Montparnasse and Sèvres-Babylone with the famous Le Bon Marché. These three major Parisian shopping areas are very different:
• Located on the Front de Seine, the Beaugrenelle shopping mall was redesigned by Valode and Pistre architects in a style reminiscent of the classic Parisian department stores with an oval atrium and colourful skylights providing natural light. It provides an area of about 46,500 sqm of retail and leisure, 110 stores, a department store, restaurants and a movie theater multiplex (ten screens). The stores are a mix of traditional French luxury brands such as Guerlain or Baccarat, international brand names and even a large Marks & Spencer. Most of the restaurants offer a view of the Seine and the roof top of the center is planted with native regional flowers and hosts honey producing
• The “rue du Commerce” is still a major shopping street with many shops of perfume, lingerie, clothing, tableware, decoration and gifts, banks, a few restaurants and cafes including the famous Café du Commerce, and delicate food stores (bakeries, butchers, etc.).
• Le Bon Marché is a famous French luxury store with among others the "Grande Epicerie" which proclaims itself as the largest food store in Paris. Actually you find there many of food artisan shops (fish, cheese, meat, sausages, pastry, etc.), a wine cellar, right next or on the upper floors, of big luxury brands of perfume, clothing, etc…and on the top floor a restaurant under its glass roof.

15e arrondissement - Traditional, quiet, popular, “bobo”, innovative ... the 15th is a vast land full of promises, which attracts more and more Parisians. With large aristocratic avenues next to Ségur, HLM lines close to Pote de Brancion, stunning villas around the Georges Brassens park, a village atmosphere in the “rue du Commerce” and more provincial at Convention or Saint-Lambert ... and with over 230 000 inhabitants, the 15th is a large heterogeneous agglomeration, as populous than Bordeaux,.
The 15th arrondissement is further broken up administratively into four quartiers: Grenelle, Necker, Saint-Lambert and Javel:
• Grenelle is the quarter closest to the 7th arrondissement and thus directly neighbouring the Champs-de-Mars and the Eiffel Tower. Therefore, it houses many hotels advertising the proximity of the Tower. The waterfront part of Grenelle is home to the 1970s high rise residential development of Beaugrenelle, and the eponymous shopping mall. The more inland parts of the quarter are filled with 19th-century Haussmannian buildings, interspersed with some more modern ones.
• The quarter of Necker, situated between Grenelle and the quarter of Montparnasse of the 14th arrondissement, is home to some of the locations named after Montparnasse, most notably the Tour Montparnasse and Gare du Montparnasse.It is also the location fo the famous Hôpital des Enfants malades and the notorious Institut Pasteur and its well known Museum in between many late 20th-century residential buildings.
• The southeast quarter of Saint-Lambert is most known for the Parc des expositions de la porte de Versailles, which is one of the largest and most important exposition centres in France and Europe.
• The southwestern quartier Javel had long been an industrial area of Paris, but has been reclaimed as office, residential, and recreational over the decades. It contains the Parc Andre Citroen, created over the former Citroen factory grounds, as well as the Heliport of Paris in its southern extremity.

Known for its many parks, the 15th stands out also for the development of a center of excellence in the field of medical and space research, with the Pompidou hospital, the transformation of the Necker Hospital, the launching of the Imagine Foundation for genetic diseases, the new research center of the Pasteur Institut, and the renovation of the European Space agency ... in the same way, it is worth to mention the recent installation of the Ministry of Defence at Balard, the famous "Balardgone".