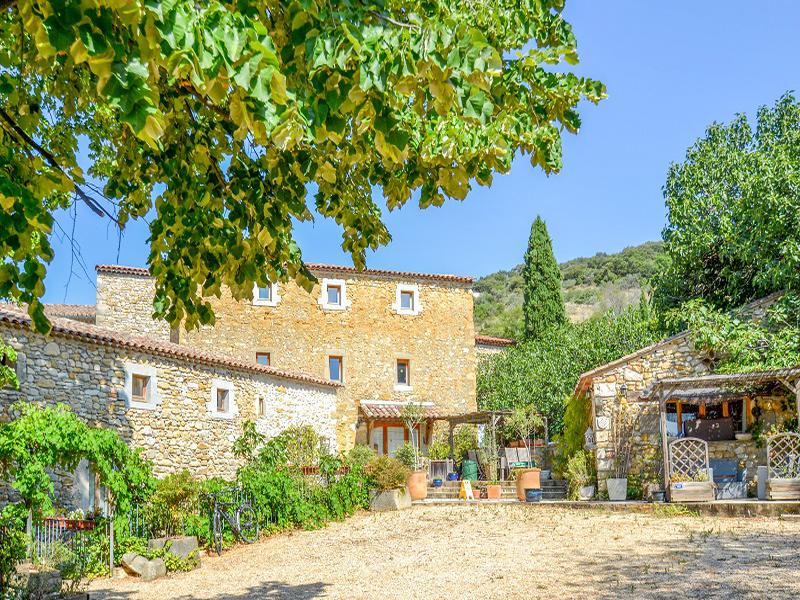 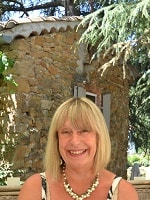 You have an old renovated stone farmhouse, with exposed stone, three bedrooms en suite, a large vaulted main room with a woodburning stove, sitting room, kitchen with bar and cloakroom.
There are five separate gites, each designed for two– five people. These are all situated in the ancient outbuildings, which were part of the old farm. They are beautifully designed, simple, rustic and extremely comfortable. Each one has their own private terrace and BBQ area. In addition there is a stone artists’ workshop, with water and power, which could be converted into an extra gite or bedroom.
The pool area is well designed, partially walled, with a summer bar, and adjacent is a large garden with a boules area, seats, a well and lovely views over the village.
St Sauveur de Cruzières is a charming Ardèche village, with local restaurants and a bakery, just two minutes’ walk away. The property is just fifteen minutes away from the beautiful Renaissance village of Barjac, with its renowned Friday market, and the following places are within 30 minutes’ drive: Caverne du Pont d’Arc, The Ardèche Gorges, Ruoms, Les Vans, two famous caves “Orgnac l’Aven” and “La Cocalière”, the Chassezac Canyons, and the medieval town of St Ambroix, with its weekly market and flea market, and that of Les Vans, with markets, cafés and restaurants.
St Sauveur de Cruzières is in the southern Ardèche, a beautiful unspoilt region. There is so much to see and do here. Lots of lively weekly markets, where producers sell their own produce, stunning walks, canoeing, many famous caves including the cavern Pont d’Arc, recently opened to the public. The Ardèche Gorges are very close by, and are not to be missed. You can swim in the rivers, go to water parks, visit lovely old walled towns, have a coffee in the sunshine, go wine tasting at one of the many vineyards or sample the very famous Ardèche beer!
Read more ...

You drive up to this lovely house from the centre of the village, arriving in front of the farmhouse, which dates from the 16th century. Here you have:
• Large vaulted sitting/dining room, with woodburning stove and exposed stone
• Kitchen and bar
• WC/cloakroom
• Upstairs,sitting room with exposed stone, three bedrooms, each with its own shower room and WC
Leaving the house, you have a series of old stone farm buildings and cottages, which have been beautifully renovated:
• Owners laundry room and storage
• Log store
• Guests’ laundry
• The five gites

Opposite the gites is the artist’s studio…La Maison de L’Artiste, an airconditioned studio with water and electricity
In the grounds there is a well, a large orchard with benches, and beautiful views, a boulodrome which is lit at night, a lovely heated pool with bar, 13.75x5.5 (UV filtered).