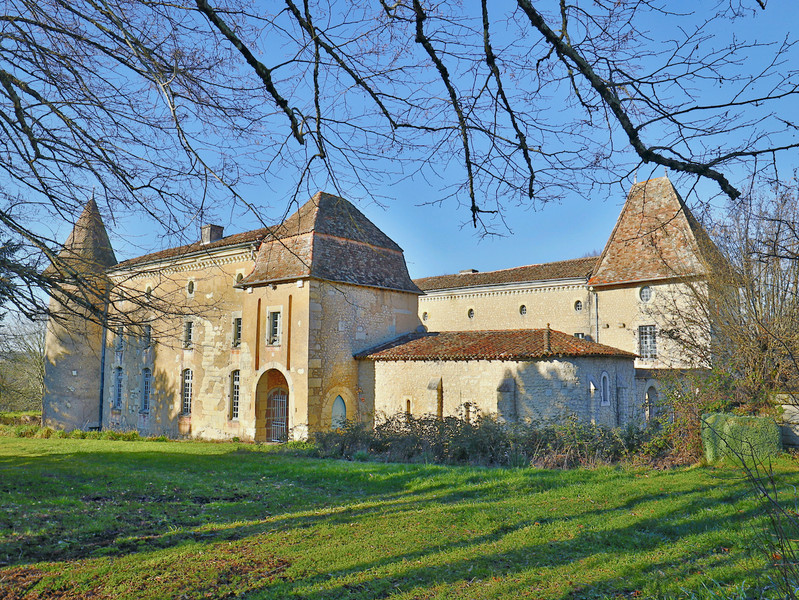 Impressive château built in the 14th and 18th centuries comprising a logis with 12 bedrooms, various reception rooms, a small chapel, as well as 4 gîtes set up in its outbuildings around a large swimming pool. 13ha park composed of woods and meadows. 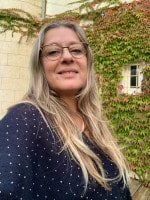 This magnificent property, situated on the edge of a small Charentaise town, originated around 1370 and was rebuilt on its own ruins in the 18th century, then to be completely renovated again in the 1930s.
Its current owners now offer 4 gîtes for rent, as well as several flats and reception rooms located in the castle. Its tiny chapel and extended grounds makes it the perfect spot for receptions, marriages, seminars, etc...

* 10 min from Aubeterre-sur-Dronne, listed as one of the most beautiful villages in France.
* 45 min from Angoulême
* 1.15h from Bordeaux, Bergerac and Cognac. Read more ...

The west entrance to the castle - which included a drawbridge - is surrounded by a dry moat, giving access to a large underground cellar. The U-shaped building evolves around a central courtyard, closed by arches overlooks the outbuildings.
A small chapel on one side and a guardhouse on the other welcomes us into the building. A first flat opens on the left onto a kitchen/dining room, with a magnificent panelled library in the adjoining room. A discreet door opens onto the staircase leading to the bedrooms. Further on, a large and very bright reception room, with its large living room in a row, and its monumental fireplace.
A second kitchen in the west wing of the building leads to a long corridor opening onto various technical rooms.
Upstairs, 12 bedrooms including 2 suites, several bathrooms and shower rooms, served by long corridors.

The outbuildings have been renovated to form 4 gîtes, with a total of 8 bedrooms. evolving round a 12 x 6 m swimming pool. A game room, badminton, and pétanque court finishes the ensemble.
The adjoining old barn could be converted into a fantastic reception room. 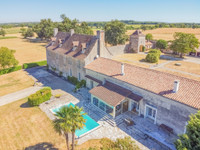 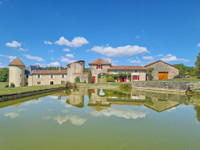 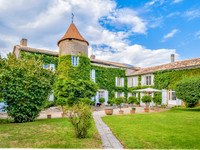 Search in Neighbouring Villages and Towns near Bardenac