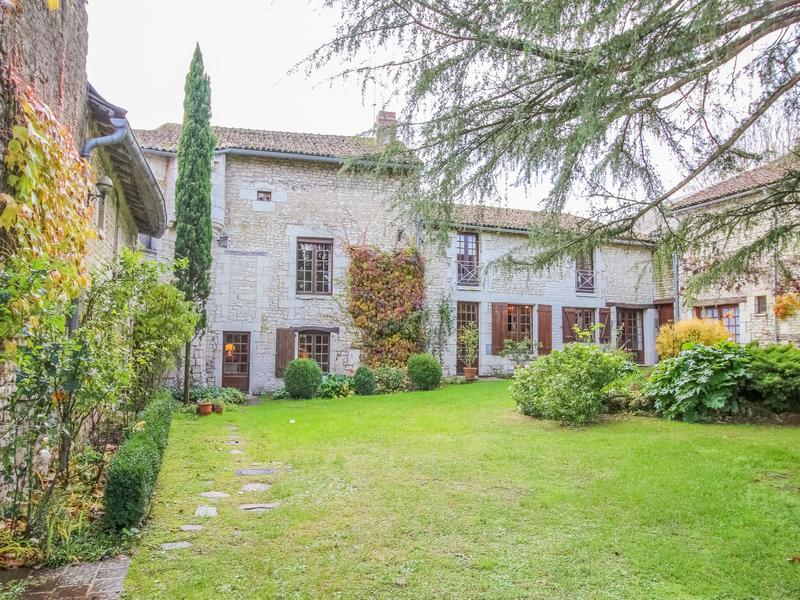 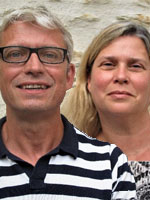 In the heart of the pretty village of Faye la Vineuse, hidden behind tuffeau stone walls, this gorgeous property has been run as a “maison d’hotes” by the current owners. With the covered hangar, you have flexible living space both inside and out. The separate one bedroom house provides additional accommodation when friends and family visit or could be used as a caretaker’s cottage. There is a huge barn and outbuilding which offers the possibility to create further living space if desired and a lovey courtyard and rear garden. Read more ...

Entering through the gateway directly into the enclosed courtyard garden, the main house with 12th century turret is in front of you, the separate one bedroom house is to the left and the huge barn is to your right. You enter the kitchen (33m2) down a couple of steps. The kitchen, which is large enough to dine in has an open fireplace, exposed beams, stone walls and tomette floor. Off the kitchen is a separate pantry. To the right and up a couple of steps, you enter into the large living room (75m2) with feature fireplace, exposed beams and stone walls and lovely tomette floor. The current owners have arranged the room as a seating area around the fireplace and separate dining area. Two separate doors from the living room lead back out to the courtyard. Double doors at the end of the room lead out to a the hangar (45m2) which provides a covered terrace, perfect for al fresco dining and also access to the garden. At the rear of the living room, a door takes you through to a lobby off of which is a large store room (60m2) which could be converted to make an additional living space and up a couple of steps takes you to a shower room and laundry room. A stone staircase from the living room leads to the first floor where there is a mezzanine (70m2) is used as a library and office space but could be a second lounge or games room. Off of this space are the four bedrooms (all between 20m2 and 35m2); the first has a quirky bathroom off to the side and up a couple of steps which has a sunken bath, separate shower, WC and washbasin; the second has a bathroom with separate shower, WC and sink. Up a small staircase, the third has a dressing area and separate bathroom with shower, WC and sink and down a couple of stairs, the fourth has a bathroom with shower, WC and sink. This room was used as private quarters when the vendors operated a “maison d’hotes” as a separate stone staircase from this room leads back down to the kitchen. Back out in the courtyard, is the one bedroom guest house (70m2). Entering into the living space (30m2) you pass under the small mezzanine landing to the rear of the living space with kitchenette. The bathroom (11m2) with separate shower, WC and sink is to the rear and has a door to the courtyard. Upstairs (25m2), off a landing is the bedroom which has a mezzanine. There is a WC to the rear of this room. Across the enclosed courtyard garden which has a pretty pond and rockery and aviary (in need of restoration) there is an outbuilding used for storage of garden equipment and a huge barn (350m2) on two levels with two rooms. Part of the barn is double height. A covered pathway beside the barn gives access to the covered terrace and garden. There is a parking area behind the barn. The garden which is mostly laid to lawn has flowerbeds, trees and there is also a vegetable garden. In the garden is a vaulted cave. The village of Faye la Vineuse has a depot de pain, artisan baker and chocolatier. It has a lively village community. The beautiful historic walled town of Richelieu is just 7kms away, with a twice weekly market, shops, bars, restaurants and supermarkets, banks, post office, cinema and medical centre. There is easy access from the ferry ports at Caen Ouistreham (approx. 3 hours) and Le Havre (approx 4 hours.) Poitiers and Tours airports are both less than an hour away and serviced all year round by Ryanair to London Stansted; The TGV high speed train services from Paris stops at Tours, Chatellerault and Poitiers. Close to the A10/A85.